Valentine's Day Look by bowenmariah featuring lace up boots
Posted by missthing at 7:26 AM No comments: Links to this post

Reflections on a Show

First, some business. I really have no excuse for why I haven't posted for a couple weeks. The only reason I didn't this past week is the spring semester started.
Second, the tutorial I promised last time I posted about depotting was my first video. Well I have managed to lose the video. I uploaded it to my computer, and I don't know where it saved and it was automatically deleted from my camera. Should I find it, it will be uploaded ASAP. I can throw together a picture tutorial if you would like.
Lastly, A Midsummer Night's Dream opens in a couple weeks and I'm really excited. I've been able to have fun with this show since I haven't had but a few lines to memorize. I'm also making my own costume! I can't wait to show you guys pictures. Below is a picture of the poster. If you're nearby, it'd be great if you could come. I'm the one on the bottom with no lips. 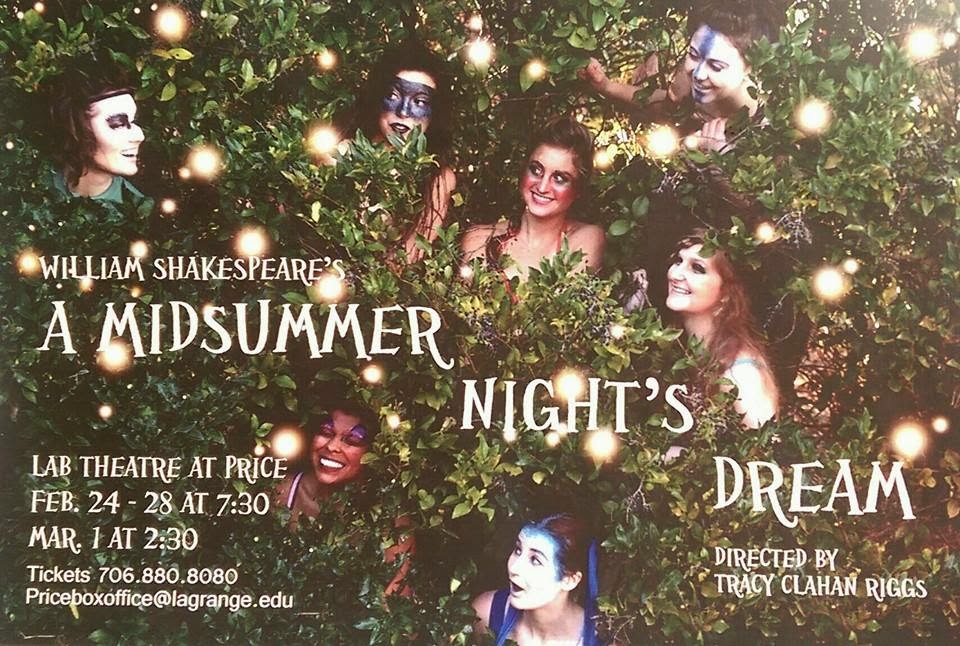 I have to say though, I love being a character like this. All the fairies are whimsical, beautiful, and sexy in their own way. Several of us are making our own costumes, and we get to connect with our characters in a deeper way. We had a rehearsal last week where we came in and just were our fairie. We just played with each other and in the set for an hour. Watching everyone else and finding my character in that rehearsal was really freeing and beautiful. It's hard to explain why unless you've experienced something like that. It's just a moment of freedom, letting go, and becoming something else. Embodying something else.
All of the fairies are based on a plant or animal of some kind. My fairie is based on a mote, a dust particle in the air. How do you embody a dust mote? Well, think about every situation a mote could be in. When it catches the light in the sunset and it's just gracefully floating in the air until someone walks through that space. When it's a particularly windy day. When it's rainy, or snowing. When it's hot and humid out. Thinking of every possible circumstance and moving in a way that a mote would. I also get these interesting fabric wings that I keep in mind when moving.
This has been one of the most chill shows I've been in for a while. Since when I'm called at rehearsal isn't for very long, I don't have a lot of late nights before tech week. It's given me freedom to explore this character in a different way. It's allowed me to connect through movement and unspoken interaction with other fairies. All the fairies are paired, and my pair is Cobweb, the one in black. We both have wings and explore our forest on top of set pieces. I'm also paired with Mustardseed (not pictured) since we both play instruments in the show.
All in all, I think this show is going to be fantastic. I'm really looking forward to tech week and everything that's going into this show. The set is one of the design students senior thesis, and it's AMAZING! He building this giant tree for the fairies and designed a covert for the floor to work as the forest and Athens (where the humans in the show are from). The lights are being designed by one of the juniors, but I've yet to see those.
If you have any questions about the show, ask below! I will definitely answer any of them. If you're interested in seeing the show and live in Georgia or Alabama (maybe north Florida could make the drive), then email me at stuckinsevencontact@gmail.com for more info.


Let me know if you like hearing reflections on shows and I will do them in the future! Coming up this semester is The Misanthrope (which I'm probably not going to be cast in since I haven't had the Period Styles class) and the directing class one act shows. I will certainly have a lot to talk about with those.
Posted by missthing at 3:00 PM No comments: Links to this post

Quickie but a Goodie

Ever have those mornings where you're in a rush to get out the door? You too? All the time? Outfit formulas make getting ready super easy. Mine tends to be a t-shirt, skirt, and jacket. Casual yet polished. A little red lipstick and mascara makes you look awake and ready to go! 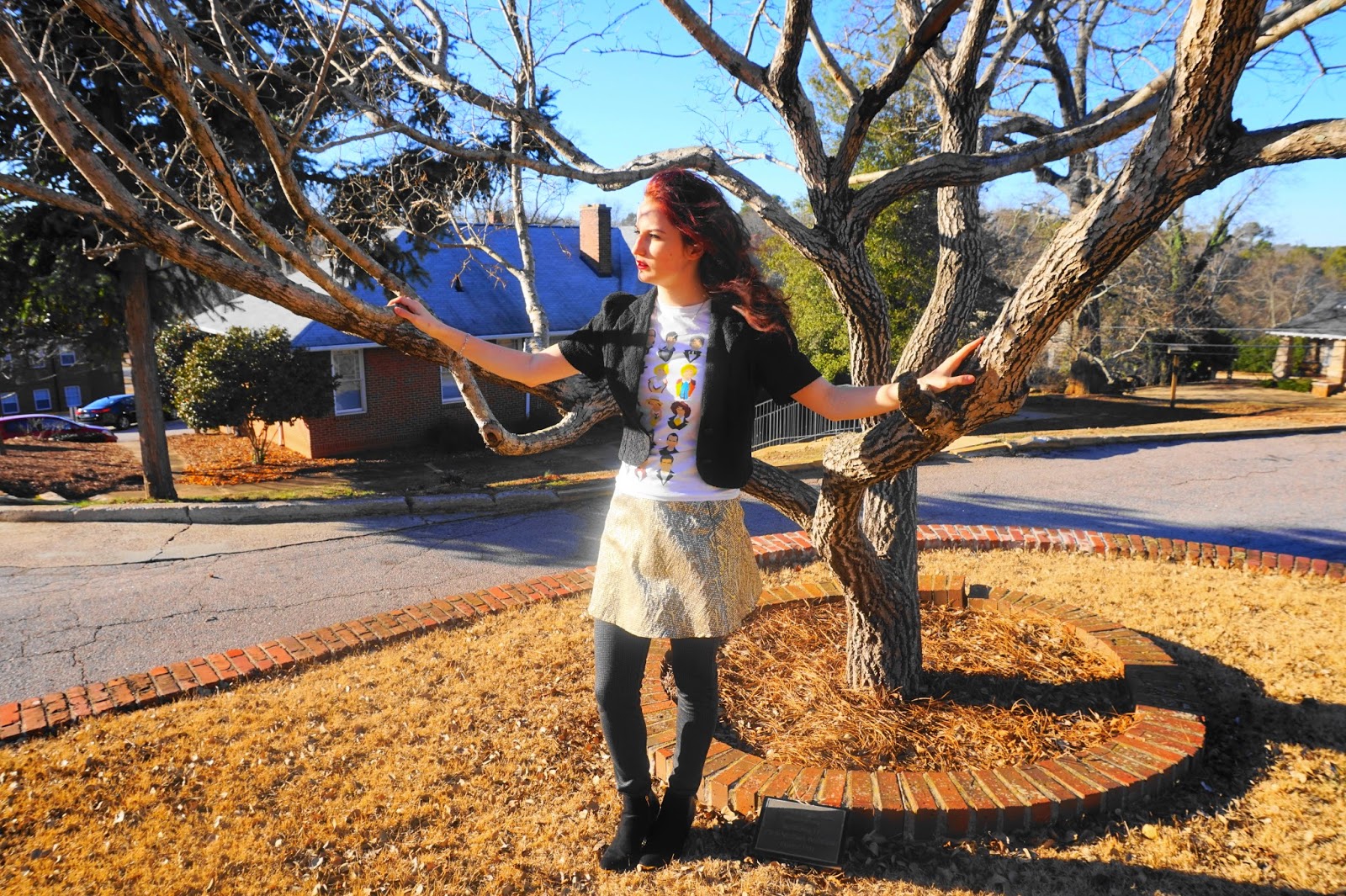 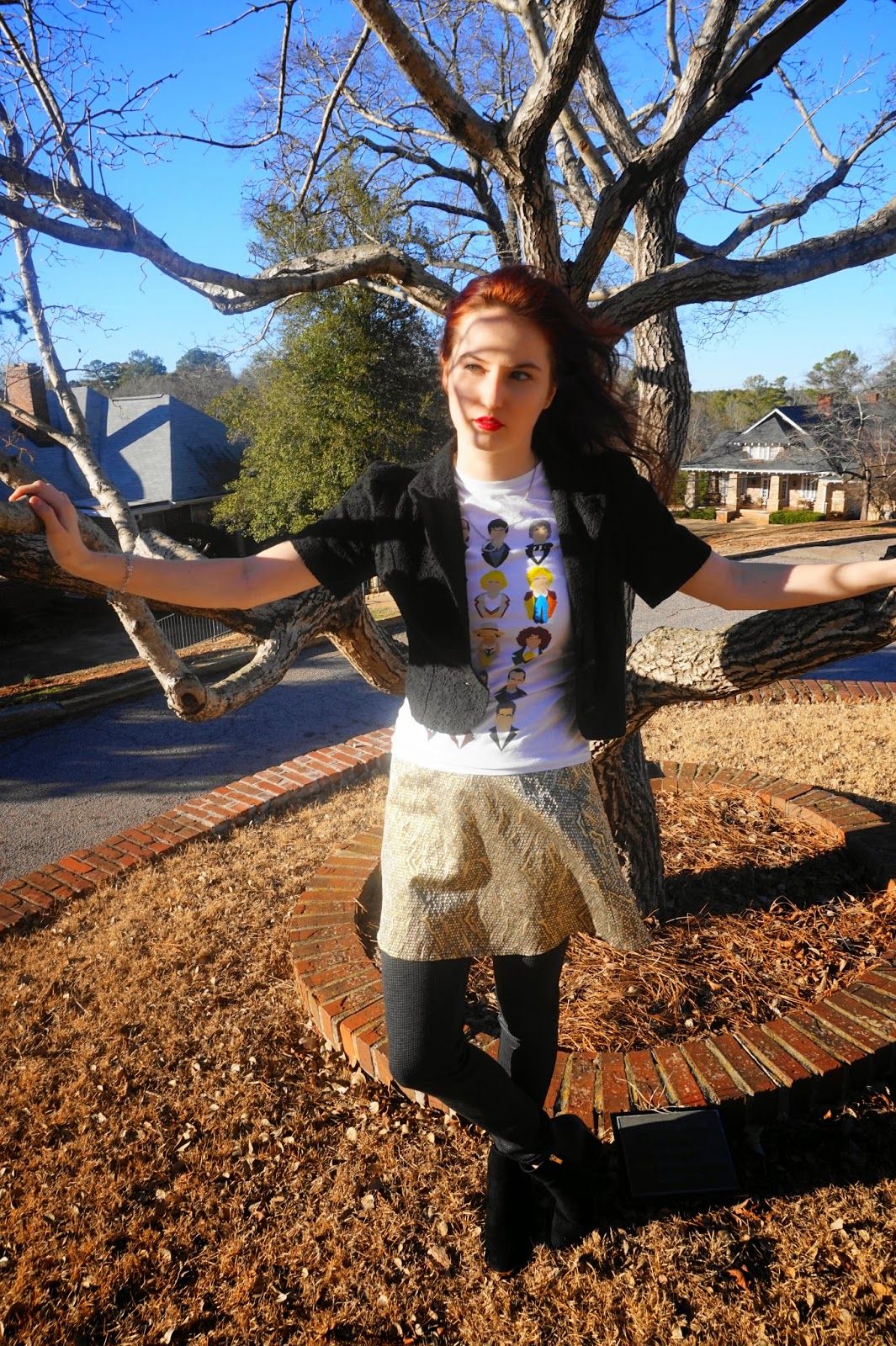 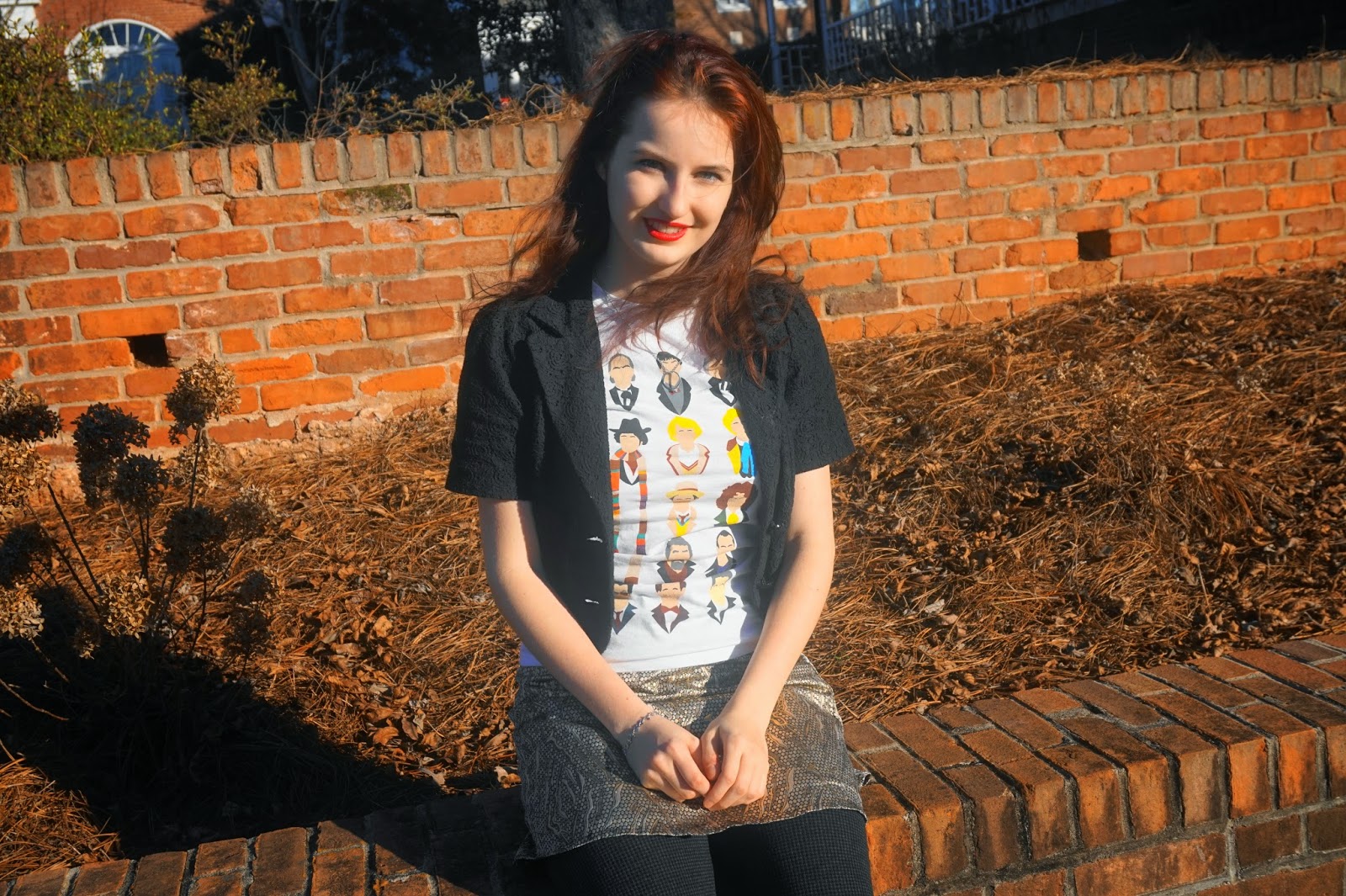 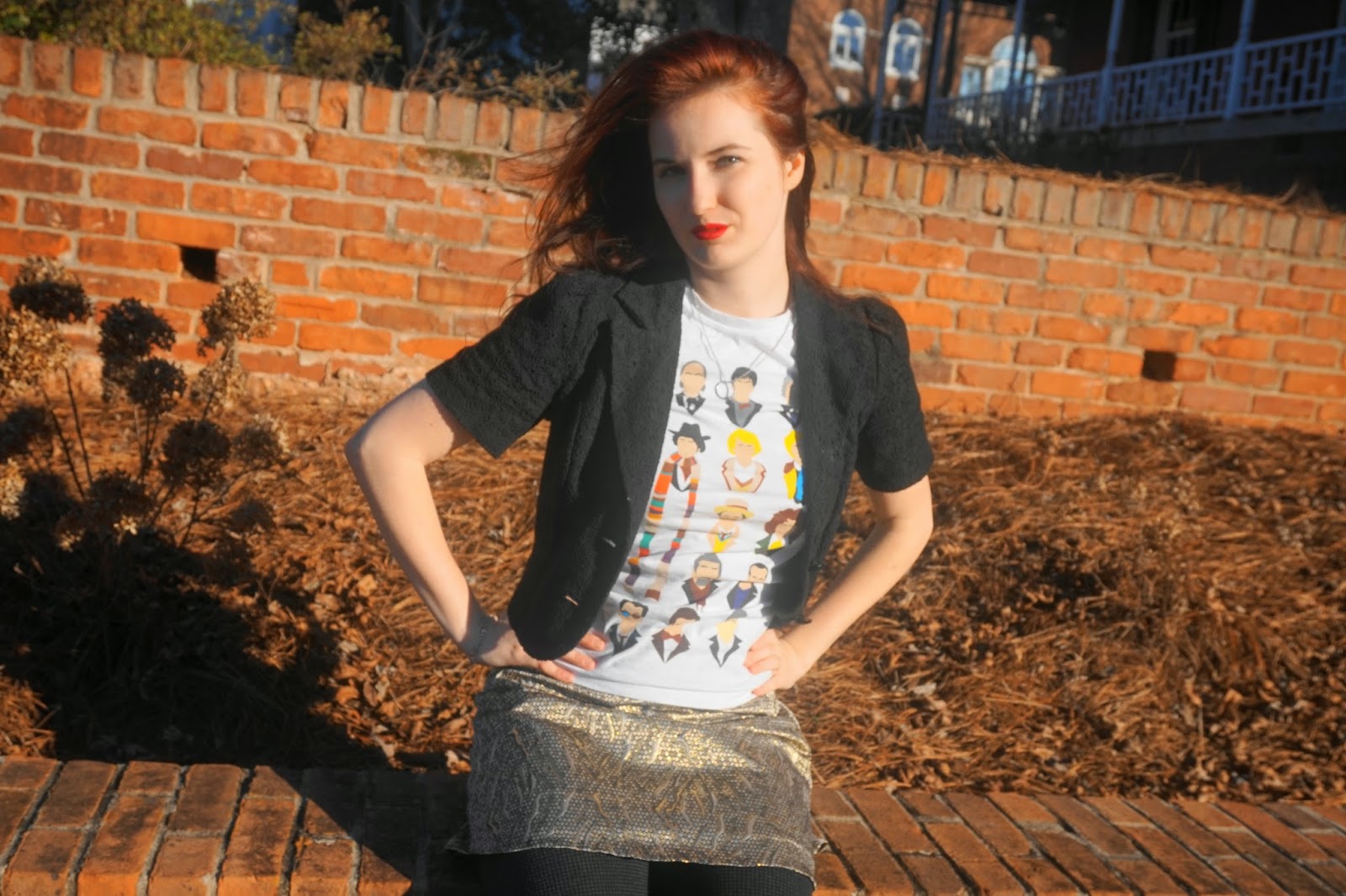 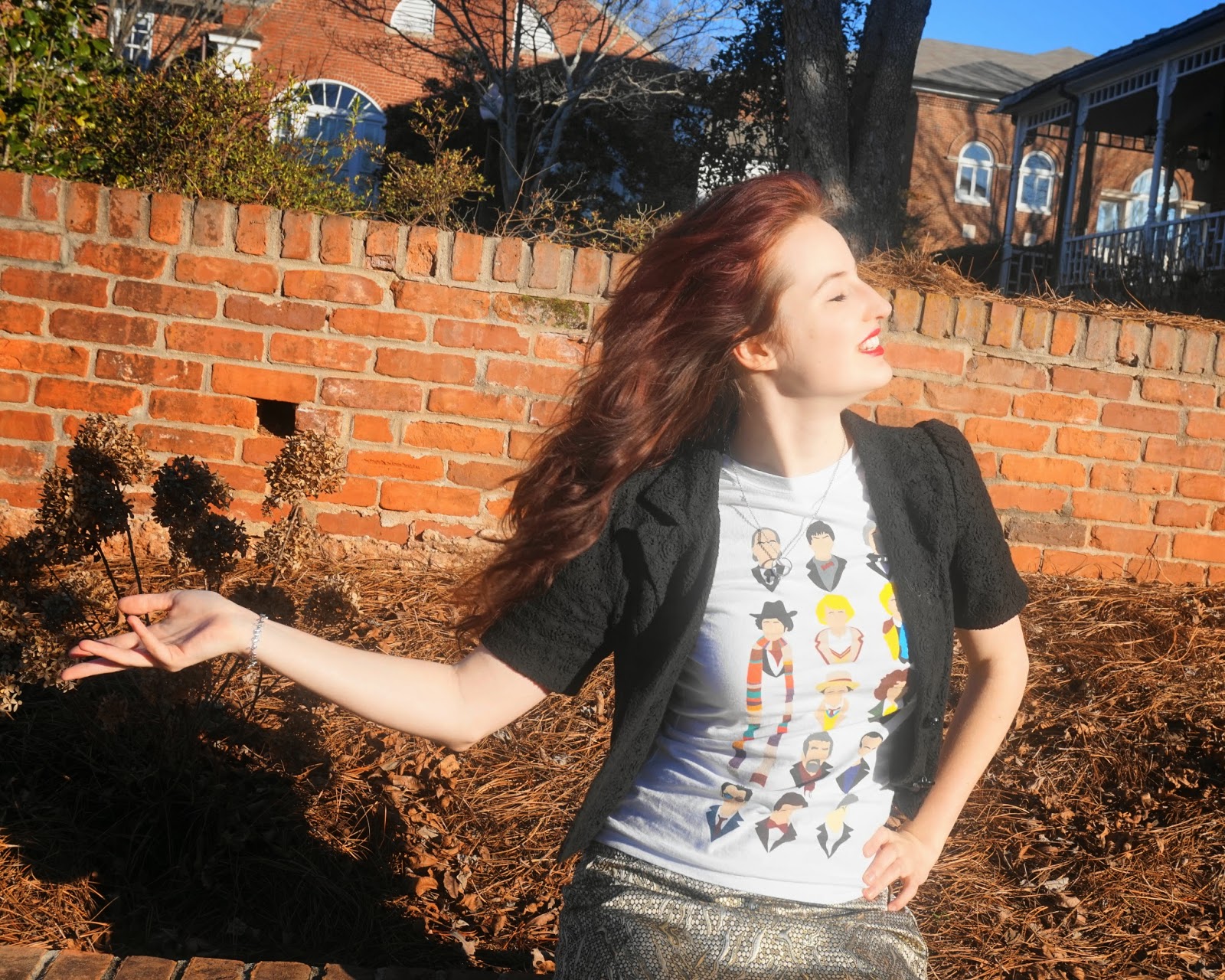 Silly moments. The wind was messing with my hair so I just embraced it :) 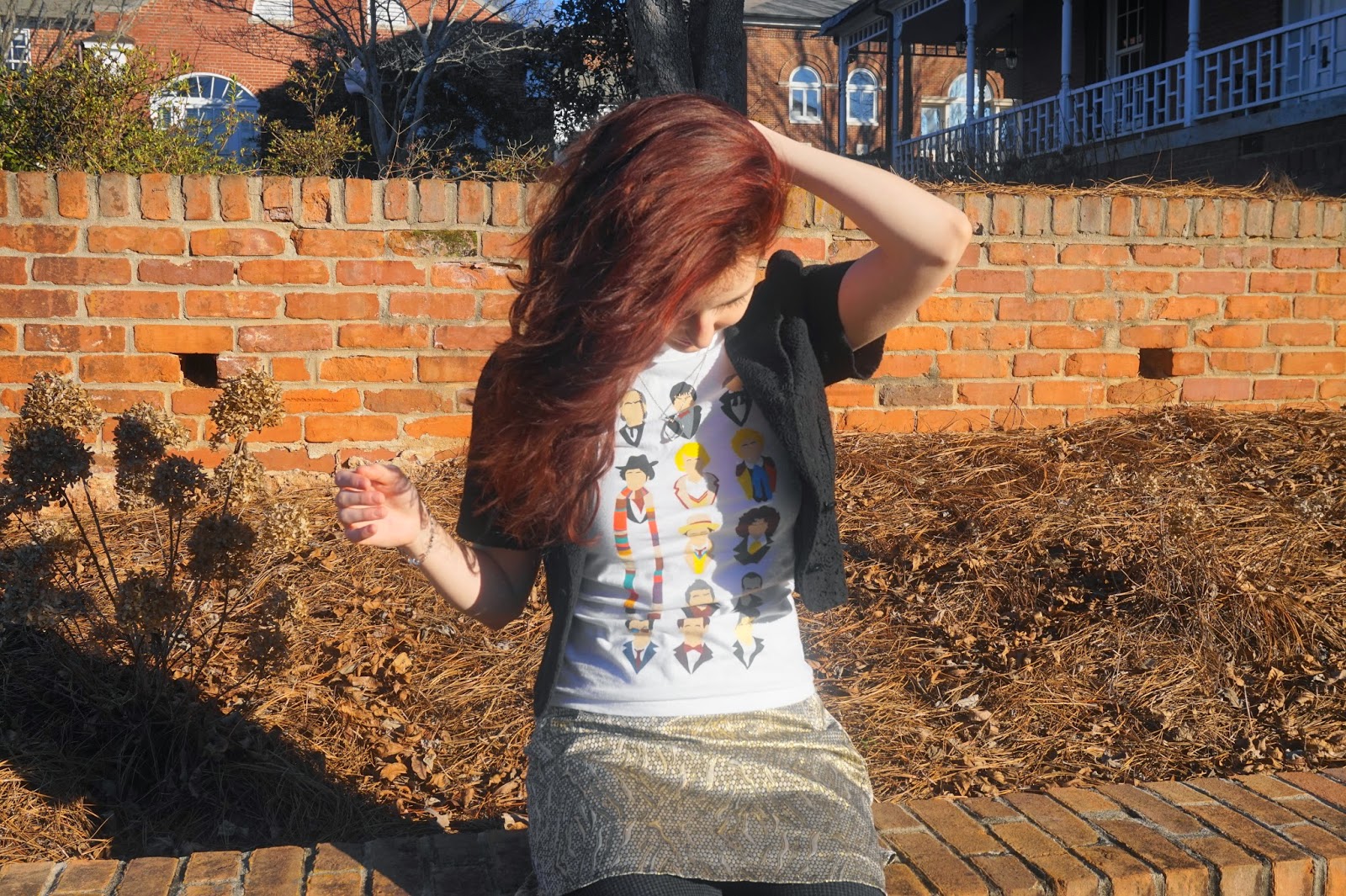 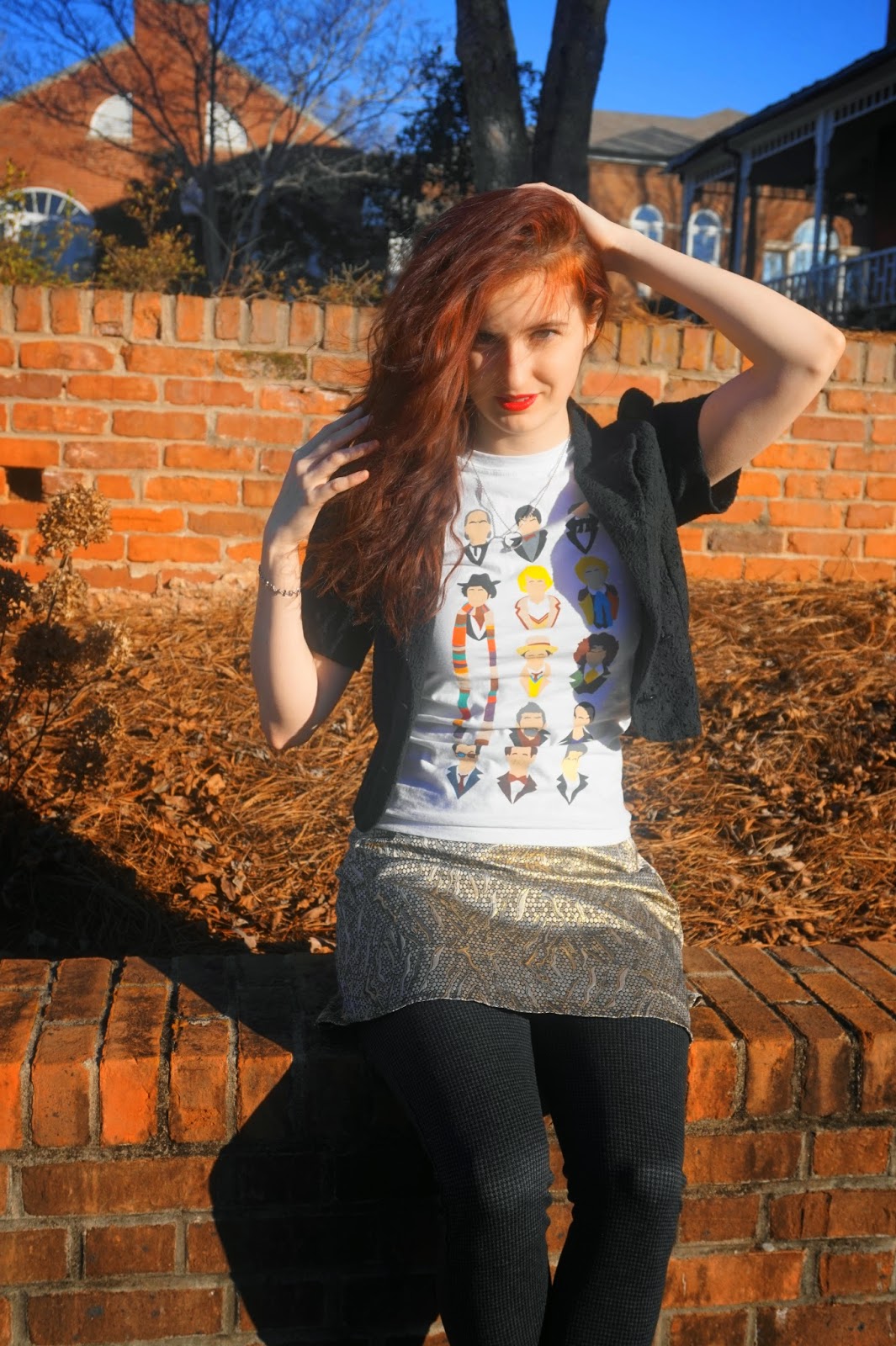 You can really see my red hair in this light! 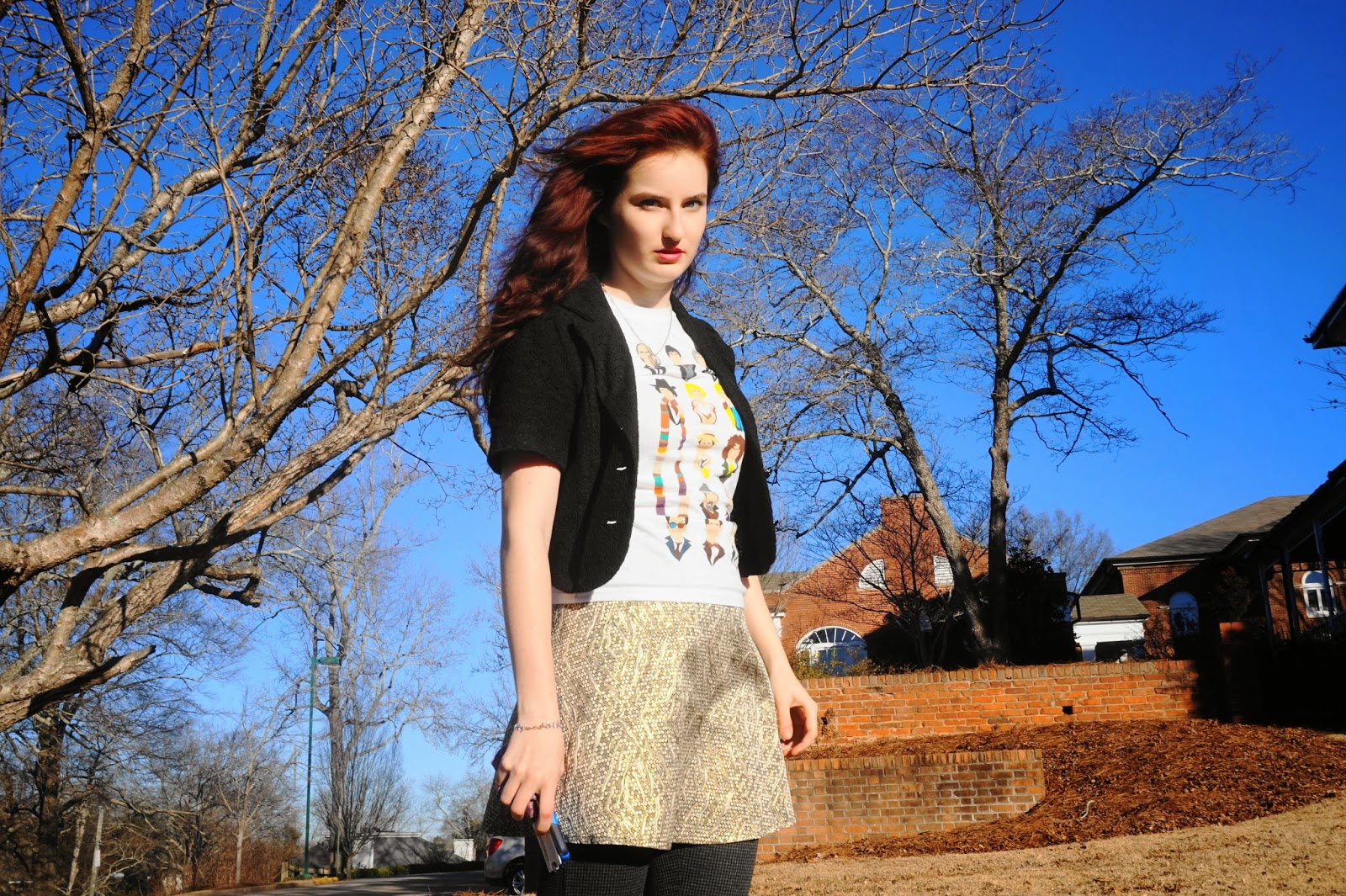 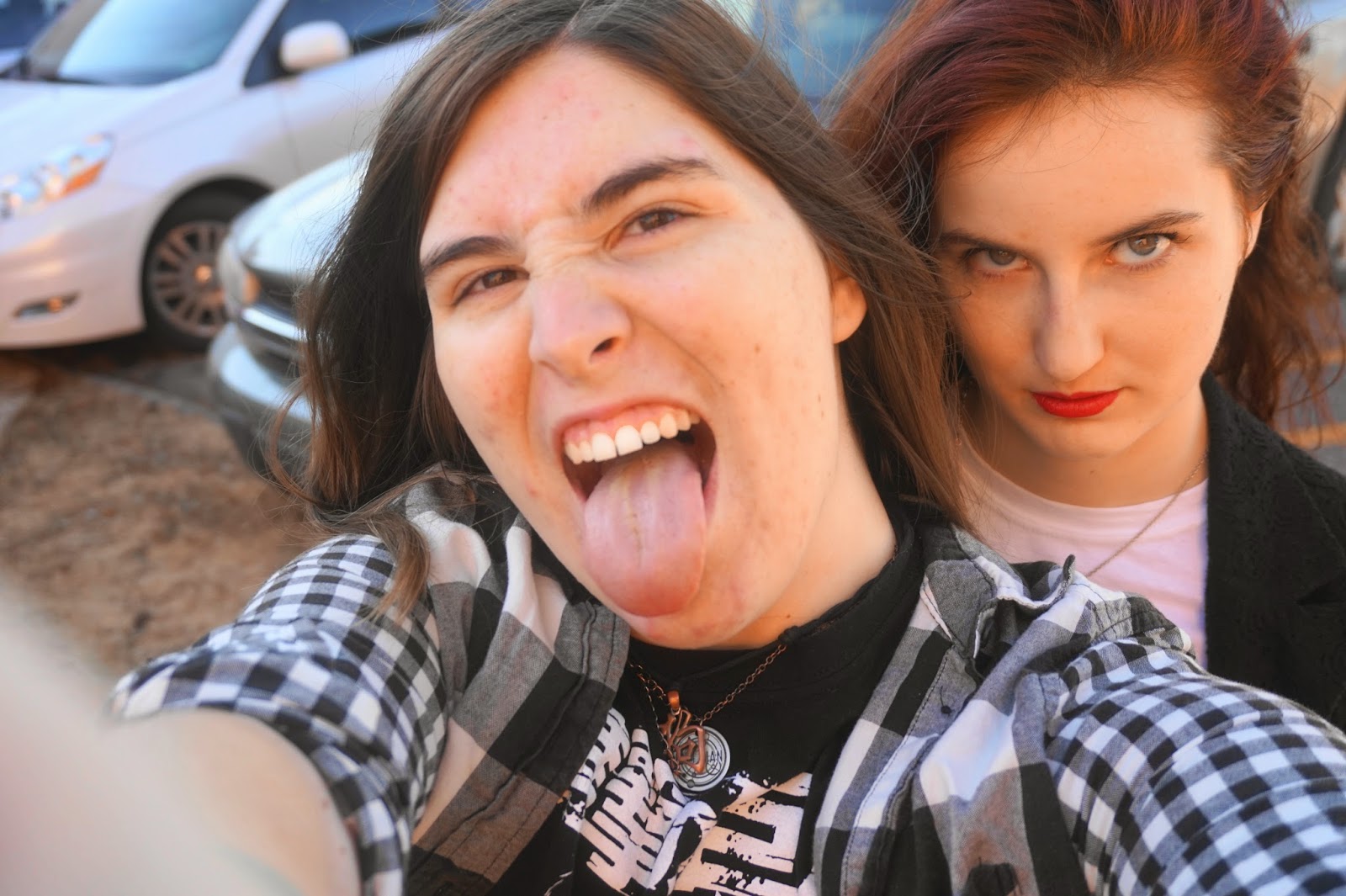 My photographer thinks she's amusing. But she's pretty awesome. Considering we shot these photos in about 15 minutes with my camera at 2% battery, I think it turned out pretty good!
Posted by missthing at 3:00 PM 6 comments: Links to this post

Hey guys! I've been a little caught up in work this week, so I don't have anything super insightful to bring to you. I thought I would share my favorite things lately. If I get enough response, I'll make this into a series :)

1. Korrasami!!!
If you didn't know already, I am a huge nerd and fan girl. I've been following the Avatar: The Last Airbender series since about the 3rd or 4th episode when I was 11. In the past few years, the creators have made a spin off called The Legend of Korra. There was one ship no one thought would be canon until the last season: Korrasami. This pairs the two friends, Korra and Asami, in a lesbian ship. The creators have confirmed that it is canon! They remind me so much of me and my girlfriend and we're gonna cosplay as them sometime! (Sorry if my fan girl just spewed everywhere. Also, if you're a Makorra shipper, I'm sorry for the more obnoxious Korrasami fans.)

Read more »
Posted by missthing at 3:00 PM 3 comments: Links to this post

Most of you probably know that petroleum jelly (commonly known as Vaseline, but that's a brand) can be used to make lip gloss if you mix in broken eye shadow or Kool-Aid. But what else can it be used for? I've compiled a list for you guys to check out over the weekend!

1. Highlighter. Lightly apply on your cheek bones and anywhere else you would normally highlight for a natural glow!

2. Removing makeup and restoring lashes. Did you know that applying mascara can actually cause your eyelashes to be more brittle and more likely to break or fall out? If nothing else motivates you to go makeup free for a day and take off your makeup at night, I don't know what will! Applying petroleum jelly to your eyelashes at night can help remove makeup and make them grow.

3. Moisturizer. You may know this one, but it's a great moisturizer. Just glide it over your lips, hands, or feet and you're good to go!

Read more »
Posted by missthing at 3:00 PM 4 comments: Links to this post